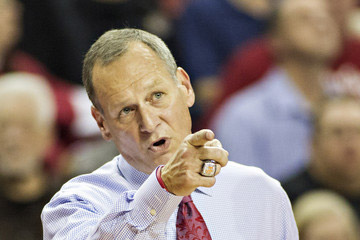 Winning seasons, outstanding graduation rates for his players and a basketball team where the players feel at home are all attributes that reflect on the man who is now in his twenty-fourth season as a head coach and his eighth as the head coach of the Ragin’ Cajuns.

When you look at Bob Marlin’s coaching career record, the word “champions” is often seen. Marlin has been successful with every program he has led from a junior college national championship to Southland and Sun Belt conference championships. Marlin’s reputation as a tremendous coach is established nationally and his program is respected across the vast world of college basketball. ESPN commentator Jay Bilas calls Marlin “an excellent basketball coach that would be successful on any level. Coaches respect him and players want to play for him. That’s a great combination. Bob Marlin is the real thing.”

On March 29, 2010, Marlin accepted the challenge of rebuilding Louisiana Ragin’ Cajuns basketball. He knew well of the winning tradition that Coach Beryl Shipley had established in putting UL (USL at the time) in the nation’s top 10 in the early 1970’s. “What Coach Shipley and his players did is one of the great stories in college basketball history,” Marlin says. As he set out rebuilding the Ragin’ Cajun program, Marlin has not wavered, instilling within it the beliefs and style that allowed him to join an elite group of coaches by earning his overall 400th win during the 2013-14 season. Marlin recognized quickly the love of Ragin’ Cajun sports and wanted to do great things for the city and the program. “Lafayette is a special place, a unique place.”

During Marlin’s first season, he led the team to 11 straight victories, which was the nation’s longest active streak at the time. The streak ironically tied a 38 year record held by Coach Shipley’s final team in 1973. His first Cajun team hung a banner for the Sun Belt Western Division Championship and the Cajun Nation was electrified. “Our first season was one of the most exciting seasons I have been a part of. The way our community got behind our team and packed the Cajundome was phenomenal; it was just a glimpse of what this program can do in the future,” Marlin said. The Cajuns followed up the exciting 2010-11 season with Marlin’s rebuilding process in full swing. The 2011-12 squad showed remarkable improvement and finished the regular season with the first winning campaign in five years. Louisiana hosted a postseason game in the CollegeInsider.com Tournament, the first postseason game ever played in the Cajundome.

In 2012-13, Marlin had just four lettermen and one starter back but used the season to teach a young squad the importance of team play. The development of sophomore Elfrid Payton, junior Bryant Mbamalu and freshman Shawn Long were setting the table for future success. The Cajuns ended the year playing their best basketball, including a 19-point win over North Texas in the opening round of the Sun Belt championship, snapping a seven game tournament losing streak that dated back to 2004-05. Cajun fans began to witness the great strides that were taking place.

In 2013-14, the Cajuns made history and gave fans a season to remember. The season was marked by the Cajuns leading the Sun Belt Conference in scoring at 81.0 points per game (which ranked them 14th nationally), assists (13.5) and rebounding margin (+3.4). The 2014 campaign was capped by a magical run through the Sun Belt Conference tournament to be crowned champions. The regular season included 246 made 3pt field goals (the most in 17 years) and 613 made free throws (the most in program history). Marlin picked up his 400th career coaching victory on December 30, 2013, in a 90-58 win over Central Methodist. During this historical season, he coached three 1,000 point scorers from three different classes—sophomore Shawn Long, junior Elfrid Payton and senior Bryant Mbamalu. Marlin led the Cajuns to a strong finish, winning 11 of the last 13 games and earning the number 3 seed in the Sun Belt Conference tournament. The drama ran high at Lakefront Arena in New Orleans, La, during the tournament. After getting a bye in the first round, the Cajuns defeated 6 seed UT-Arlington in the quarterfinals, the 2 seed Western Kentucky in the semifinals, and the one seed Georgia State in the finals. The overtime win over Georgia State in front of a crowd of red and black gave the Cajuns the SBC Championship title and punched a ticket to the NCAA tournament, the first official NCAA tournament appearance since 2000. Bryant Mbamalu was selected as the Sun Belt Conference Tournament’s Most Outstanding Player and Xavian Rimmer was chosen on the Sun Belt All-Tournament team. The Ragin’ Cajun name would be broadcast world-wide when the Cajuns played Creighton University on March 21, 2014, in the second round of the NCAA tournament in San Antonio, Texas.

The Cajuns finished with 23 wins, the most since 1999-2000 and the most home wins (13) since 1990-91. This was the 22nd twenty win season in program history. While the team was setting records, individual players were also adding their names to the record books. The Cajuns were led throughout the season by Elfrid Payton and Shawn Long, who both set multiple individual records with their performances. Both Payton and Long were named First Team All-Sun Belt Conference and Payton was also selected as the National Defensive Player of the Year. The season of highlights was capped with Elfrid Payton becoming the number 10 pick in the NBA draft in June.

In 2014-15, Marlin led the Ragin’ Cajuns to a second consecutive 20 win season finishing 22-14. The team won seven consecutive games to end the year before a tough four point loss to eventual champion Georgia State in the Sun Belt Conference Tournament semifinals. After two good road wins in the CIT, Louisiana lost a close quarterfinal game versus eventual champion Evansville in Blackham Coliseum. The Cajuns led the SBC in scoring for the third year in a row and finished 16th nationally. Shawn Long was a first team All-SBC Selection, Lou Henson All-American and 2015 member of the U.S. Pan American Men’s Basketball team.

The Ragin Cajuns finished the 2015-16 season with a record of 19-15 and won nine consecutive games – the longest streak since Marlin’s fist team won 11 in 2010-11 and tied a 38 year school record. Louisiana also set a new Cajundome record by winning their first 11 home games around a difficult schedule. They earned a four seed in the SBC Tournament and lost in the tournament semifinals for the second consecutive year to the eventual champions. Louisiana made their fourth post season appearance in five years accepting a bid to the CollegeInsider.com Tournament. The first game was a 96-72 win at the Cajundome over a strong 25 win team in Texas A&M – Corpus Christi. The second game was a tough 80-72 road win over Furman, who was undefeated for the first time in school history on their home court at 14-0. The win marked the second consecutive CIT quarterfinal appearance for the Ragin’ Cajuns. A tough last second one point loss to a tall and 28 win UCI Anteater squad ended another solid year. The team led the SBC in scoring for the fourth consecutive season and ranked 29th nationally. The Cajuns also ranked high in NCAA rebounding – sixth in offensive rebounds, 7th in total rebounds and 13th in rebound margin. Louisiana continued their aggressive offensive play finishing 9th nationally in free throws attempted and 15th in free throws made.

Paced by Sun Belt Conference Defensive Player of the Year Jay Wright, along with forward Bryce Washington, Louisiana finished the 2016-17 season with a 21-12 record while ranking among the national leaders in scoring offense (19th, 81.9), rebound margin (26th, +5.6) and offensive rebounds per game (14th, 13.39).

Joined by Sun Belt Conference Newcomer of the Year Frank Bartley, the Ragin' Cajuns posted winning streaks of eight and seven games during the season and recorded its most road victories (8) since the 1999-2000 season. They Also produced their best non-conference record in 26 years at 10-3.
Marlin came to UL after leaving his mark on basketball in Texas. He is the winningest coach in Sam Houston State University history, compiling a record of 225-131 from 1998-2010. During the twelve seasons, Marlin coached his teams to winning records in 9 seasons and 20 win seasons six times. He was named Southland Conference Coach of the Year three times (2000, 2003, and 2010). He led his team to three regular season titles and two league tournament titles (2003, 2010). Marlin was celebrated as the Southland Coach of the Decade for 2000-2010.

Marlin led the program at Sam Houston to new heights, bringing the BearKats their first, but not last, Southland conference championship, the school’s best nonconference record at the Division I level, and first ever votes in the Associated Press national top 25. From 2000 until 2010, Sam Houston ranked second among the 20 Division I schools in Texas with 215 victories and .651 winning percentage. In Marlin’s final season at Sam Houston, the team set a school record for wins finishing 25-8 and won the conference tournament title and a trip to the NCAA tournament. After this successful season, Marlin was honored as the 2010 District 23 NABC Coach of the Year and the Skip Prosser Man of the Year. Marlin ranks second among all Southland Conference coaches with 225 wins and is one of just four coaches to win 200 or more games in the league.

Marlin took his first head coaching job in 1990 at Pensacola Junior College, a member of the nationally recognized Florida Panhandle conference. A conference that has historically been one of, if not the best, junior college conference in the country. In five successful seasons at PJC, Marlin compiled a record of 123-35 and claimed the NJCAA Championship in 1993. He was also named the National Coach of the Year.

Everywhere he has coached, Marlin’s teams and individual players have performed to excellence. As a head coach, he has coached 2 NBA draft choices, 46 all-conference selections and 66 academic all-conference student athletes. His teams have a reputation of protecting home court with an overall 83% wins at home (275-61). Marlin wants his players to be successful in all aspects of life. On the court, he admonishes them “NBA…next best action”. Off the court, he encourages strong performance in the classroom and in their personal lives. In twelve semesters as head coach, his Louisiana teams have posted 8 of the top 10 GPA’s in program history. At Sam Houston State, seven players earned Academic All-Southland honors a total of seventeen times over his final five seasons, including three consecutive SLC Men‘s Basketball Student-Athletes of the Year. His graduation rates are outstanding at 89.5% at UL and 89.3% at Sam Houston State. 17 of 19 Ragin’ Cajun seniors have graduated. This brings his rate for both schools to 89.3% with 70 of 81 seniors graduating and 9 of the 11 remaining leaving to play professionally. In a time where student often comes after athlete, Marlin has continued to invest in the future of his players. One is currently enrolled and set for December graduation.

Marlin entered the coaching ranks as a graduate assistant at ULM from 1981-83 learning under Louisiana Hall of Fame coach Mike Vining. He then became an assistant coach at Houston Baptist, dedicating six years to the program for Gene Iba and Tommy Jones. In 1989-90, Marlin spent one season under Dana Altman at Marshall before taking the reins at Pensacola Junior College. Following his success at Pensacola Junior College, Marlin served as an assistant coach at Alabama for three seasons under David Hobbs.

Born in Tupelo, Mississippi, Marlin became a student of the game of basketball at an early age. He still loves to eat fried whole catfish from the Mississippi Delta and is an avid St. Louis Cardinals fan. He attended Mississippi State University, receiving his bachelor’s degree in physical education in 1981. While coaching at Northeast Louisiana (now ULM), he completed his master’s degree in health and physical education with a minor in guidance and counseling in 1983.

He is married to the former Jennifer Murray who is a knowledgeable basketball fan with a basketball highlight of her own. She scored 46 points as a freshman at Whitesboro High School in Oklahoma. Marlin has a son Matt (25) and daughter Saylor (17) who both love to play basketball as well.